The construction of the Grand Hotel des Iles Borromées began with the reign of Italy.

In those times, Stresa was not recognized as the “Pearl” of Verbano until the beginning of the twentieth century, when it was identified as the most prestigious place on the lake Maggiore.

The small houses were situated close to the foothills of the mountain Mottarone, whilst next to the shores of the lake, today filled with villas and hotels were meadows, fields and a few vineyards. There were a few hotels on the Borromean Islands, places of incomparable beauty already famous in that era.
In 1670, the count Vitaliano Borromeo had a luxurious palace built on Isola Bella which was surrounded by terraced gardens. Nowadays, the Borromean Islands are visited by tourists from all over the world.

The set-up of Stresa continued until nearly the end of the nineteenth century. In 1801, an event of extraordinary importance occurred for the lake Maggiore and Stresa; the construction of the Simplon pass road, as requested by Napoleon Bonaparte on 7th September 1800, he dictated that the road from Briga to Domodossola “ be passable for cannons and a smooth easy route for the armed forces”. The colossal work was completed 5 years later on 9th October 1805. It was the most modern and majestic panoramic road between the Alps.

The amazing views of the Borromean golf with its islands were now in reach of the first tourists. In fact, the opening of the Simplon road increased the amount of foreign visitors from every part of the European continent.

In may 1826, the first steamboat, the “Verbano” cut through the waves of the lake for the first time, connecting Magadino (Locarno) with Sesto Calende. On board, there was also a post office. From Arona, passengers arrived at Locarno in 6 hours, whilst sailing, sometimes it took a good 6 days.

The steamboat had never stopped at Stresa before.
In 1850, Stresa’s fishing fleet had no more than 7 boats and in order to buy bread, one needed to row at a good pace until Pallanza. Up until 1860, the ferry didn’t even consider “little” Stresa, passing off the coast, however stopping at the Borromean Islands.

In those times, a family of hoteliers, the Omarini, lived on Isola Bella and managed the hotel Delfino which was quoted in Stendhal’s Italian guidebook. Furthermore, whilst in the hotel, the writer Fogazzaro completed his famous novel “Piccolo mondo antico”.

The youngsters of the Omarini family had already traveled around Europe, working in hotels as chefs.
Full of experience in the industry, the idea sprung to mind to build a grand hotel in front of the Borromean islands which would be able to satisfy the needs of the international clientele who had started sightseeing; a very interesting commercial activity.

In spring 1860, the entrepreneurial brothers proceeded to buy a few patches of land right in front of Isola Bella. With an initial capital of 1.200.000 lire, they founded the “Società Unione dei Grandi Alberghi”, located in Stresa, led by Arturo Omarini.

The construction of the Grand Hotel des Iles Borromées had started in winter 1861, the same year of the proclamation of the reign of Italy.

For the opening night a very selective public was invited: a few big hotel owners, various celebrities and a large group of nobile women in evening gowns.
The Borromées hotel was suddenly established as the “Grand Hotel” of the lake Maggiore and straight away, the Omarini brothers secured in little time the most prestigious clientele.

The ambiance was decorated with elegant mirrors and lit with marvelous chandeliers. The heating was secured by the firm Haeberlin in Milan, who had installed a system making it easy to heat 120 airy rooms. There was even an office for the British travel agency, “Thomas Cook and son”, who dealt with the sale of train and boat tickets for all around the continent.

The Omarini family were right: the name Grand Hotel et des Iles Borromées became recognized on various Italian and foreign tourist guidebooks. Guests that stayed in the hotel came from the whole of Europe but mostly England. Furthermore many German, Slavic and French aristocrats as well as influential people from the industrial and financial world.

On a gloomy rainy day, a noble Russian woman engraved with a diamond on the glass of one of the windows of the hotel the following quote

Five more years later, Anna, the princess of Assia and Prussia came and imitated the duchess of Russia, Alexandra, leaving her signature in a guest book. Even today, the precious signatures and unusual, dedicated drawings from guests are still kept.

In 1868, the building was enlarged in order to deal with the increasing number of guests and a new wing was created on the right side of the hotel as well as the first telegraphic office which opened in the area.

On the 16th March 1884, an important meeting took place at the Grand Hotel des Iles Borromées regarding the placement and construction of a rail line, which would link Italy to Europe. A draft of the document was also signed by the Omarini brothers.

In 1906, the opening of the rail line: Traforo Ferroviario del Sempione, was the final push for the increase in tourism and Stresa was highly recognized in all European continent.

With the arrival of the Orient Express, Stresa’s train station became a mandatory stop on the London-Paris-Milan-Venice-Istanbul line; bringing an elite tourism to the Grand Hotel des Iles Borromées. The number of guests started to multiply and the seasons of residence lengthened thus further extensions were required.

In 1908, the veranda was enlarged, whilst from 1911 to 1912, in just 96 days, they proceeded with the super elevation of 3 floors. The construction was led under the wise guidance of Vasco Capucci, a well known constructor at the time.

In autumn 1907, after nearly 50 years of management, Giuseppe and Luigi Omarini, started to sell shares of the Grand Hotel des Iles Borromées to the Società Anonima Unione dei Grandi Alberghi, which was absorbed in 1923, by the Italian company Grandi Alberghi (C.I.G.A) in Venice. Up until that year, the Omarini family remained the head of the company.

During the first world war, the hotel doors remained open. The hotel became a privileged place of refuge for those who still had a chance to escape the war. Fortunately, in relatively short times during the first post war, the famous guests of the previous decades started to reappear in Stresa.

In September 1918, the American writer Ernest Hemingway arrived in Stresa for the first time at the age of 19, recovering from a war wound.

Reminiscing about the beauty of the place, Hemingway, set part of his novel “Farewell to arms” in the hotel. The name of the Grand Hotel des Iles Borromées then became known worldwide.

With the start of the second world war, the hotels activity continued without interruptions, however it experienced severe set backs. Formerly occupied by the German troops and then the Americans, the building became a recovery site for the military. After a brief period between 1945 and 1946, as the headquarters of the town casino, the Grand Hotel des Iles Borromées returned to live, regaining in short time the tourism that remained.

After almost 70 years, in 1990, C.I.G.A decided to sell the hotel to a group of hoteliers from Stresa.
Since 1990, the new owners undertook a complete renovation e of the entire hotel complex and the expansion of the famous Centro Benessere, attached to the structure.

Once again the courage of the local entrepreneurs was rewarded, despite the crisis from the Persian gulf war.
The Grand Hotel des Iles Borromées was selected by Arabic families as a holiday destination, whilst waiting for the reconstruction of their magnificent buildings.

The hotel was recognized as a prestigious building by the Association of historical hotels and restaurants in Italy, and its story is continuing year after year. Public spaces have been restored, rooms, bathrooms and numerous meeting rooms have also been refurbished, thanks to the expertise of the architect Statilio Ubiali, who knew how to integrate the original décor and the new developments, in order to ensure a comfortable stay for modern travelers.

Thanks to the quality of service and the professionalism of the staff, the Grand Hotel des Iles Borromées is now chosen as a location for meetings and conferences of worldwide interest, as well as a tranquil and relaxing stay.

Today, staying at the Grand Hotel des Iles Borromées & SPA means appreciating the charm, the atmosphere, the magic of a past rich in history and traditions, at the same time as enjoying modern comforts and the latest facilities.

After this fantastic year celebrating 150 years, we are confident that the commitment and engagement from the society that manages the Grand Hotel des Iles Borromées will continue with new enthusiasm.

An overview of the experiences you can live at Borromées.
Take a look! 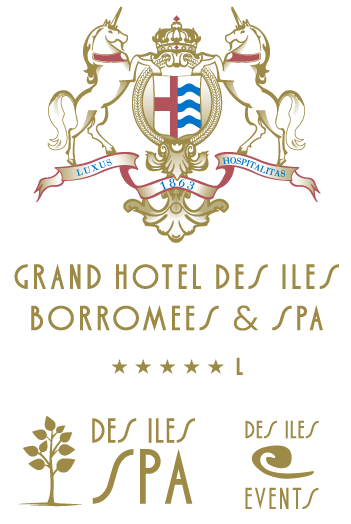